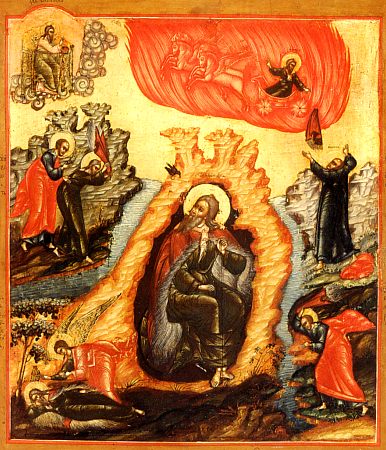 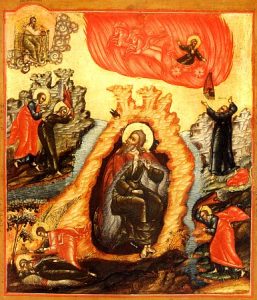 The Holy Prophet Elijah is one of the greatest of the prophets and the first dedicated to virginity in the Old Testament. He was born in Tishba of Gilead into the Levite tribe 900 years before the Incarnation of the Word of God.

Saint Epiphanius of Cyprus gives the following account about the birth of the Prophet Elijah: “When Elijah was born, his father Sobach saw in a vision angels of God around him. They swaddled him with fire and fed him with flames.” The name Elijah (the Lord’s strength) given to the infant defined his whole life. From the years of his youth he dedicated himself to the One God, settled in the wilderness and spent his whole life in strict fasting, meditation and prayer. Called to prophetic service, which put him in conflict with the Israelite king Ahab, the prophet became a fiery zealot of true faith and piety.

During this time the Israelite nation had fallen away from the faith of their Fathers, they abandoned the One God and worshipped pagan idols, the worship of which was introduced by the impious king Jereboam. Jezebel, the wife of king Ahab, was devoted to idol worship. She persuaded her husband to build a temple to the pagan god Baal, which led many Israelites away from the worship of the true God. Beholding the ruin of his nation, the Prophet Elijah began to denounce King Ahab for impiety, and exhorted him to repent and turn to the God of Israel. The king would not listen to him. The Prophet Elijah then declared to him, that as punishment there would be neither rain nor dew upon the ground, and the drought would cease only by his prayer. Indeed, the word of Elijah was a torch (Eccles. 48: 1) The heavens were closed for three and a half years, and there was drought and famine throughout all the land.

During this time of tribulation, the Lord sent him to a cave beyond the Jordan. There he was miraculously fed by ravens. When the stream Horath dried up, the Lord sent the Prophet Elijah to Sarephta to a poor widow, a Sidonian Gentile who suffered together with her children, awaiting death by starvation. At the request of the prophet, she prepared him a bread with the last measure of flour and the remainder of the oil. Through the prayer of the Prophet Elijah, flour and oil were not depleted in the home of the widow for the duration of the famine. By the power of his prayer the prophet also performed another miracle: he raised the dead son of the widow.

The Prophet Elijah told them to call on their gods to consume the sacrificial animals with fire, and he would call on his. Whichever was first to send fire on the sacrifice would be acknowledged as the true God. The prophets of Baal called out to their idol from morning till evening, but the heavens were silent. Towards evening the holy Prophet Elijah built his sacrificial altar from twelve stones, the number of the tribes of Israel. He placed the sacrifice upon the wood, gave orders to dig a ditch around the altar and commanded that the sacrifice and the wood be soaked with water. When the ditch had filled with water, the prophet turned to God in prayer. Through the prayer of the prophet fire came down from heaven and consumed the sacrifice, the wood, and even the water. The people fell down to the ground, crying out: “Truly, the Lord is God!” Then the Prophet Elijah had all the pagan-priests of Baal put to death, and he began to pray for rain. Through his prayer the heavens opened and an abundant rain fell, soaking the parched earth.

King Ahab acknowledged his error and repented of his sins, but his wife Jezebel threatened to kill the prophet of God. The Prophet Elijah fled into the Kingdom of Judea and, grieving over his failure to eradicate idol worship, he asked God to let him die. An angel of the Lord came before him, strengthened him with food and commanded him to go upon a long journey. The Prophet Elijah traveled for forty days and nights and, having arrived at Mount Horeb, he settled in a cave.

The Lord told him that the next day Elijah would stand in His presence.There was a strong wind that crushed the rocks of the mountain, then an earthquake, and a fire, but the Lord was not in them. The Lord was in “a gentle breeze” (3 Kings 19: 12). He revealed to the prophet, that He would preserve seven thousand faithful servants who had not worshipped Baal.

Later, the Lord commanded Elijah to anoint Elisha into prophetic service. Because of his fiery zeal for the Glory of God the Prophet Elijah was taken up alive into Heaven in a fiery chariot. The Prophet Elisha received Elijah’s mantle, and a double portion of his prophetic spirit.

According to the Tradition of Holy Church, the Prophet Elijah will be the Forerunner of the Dread Second Coming of Christ. He will proclaim the truth of Christ, urge all to repentance, and will be slain by the Antichrist. This will be a sign of the end of the world.

Orthodox Christians of all times, and in all places, have venerated the Prophet Elijah for centuries. The first church in Russia, built at Kiev under Prince Igor, was named for the Prophet Elijah. After her Baptism Saint Olga (July 11) built a temple of the holy Prophet Elijah in her native region, at the village of Vibuta.

In iconography the Prophet Elijah is depicted ascending to Heaven in a fiery chariot, surrounded with flames, and harnessed to four winged horses. We pray to him for deliverance from drought, and to ask for seasonable weather.

An angel in the flesh and the cornerstone of the prophets, / the second forerunner of the coming of Christ, / Glorious Elijah sent grace from on high to Elisha, / to dispel diseases and to cleanse lepers. / Therefore, he pours forth healings on those who honor him.

Prophet Elijah of great renown, / seer of the mighty mighty works of God, / by your command you held back the rain! / Pray for us to the only Lover of mankind!

14
For as many as are led by the Spirit of God, these are sons of God.
15
For you did not receive the spirit of bondage again to fear, but you received the Spirit of adoption by whom we cry out, “Abba, Father.”
16
The Spirit Himself bears witness with our spirit that we are children of God,
17
and if children, then heirs – heirs of God and joint heirs with Christ, if indeed we suffer with Him, that we may also be glorified together.
18
For I consider that the sufferings of this present time are not worthy to be compared with the glory which shall be revealed in us.
19
For the earnest expectation of the creation eagerly waits for the revealing of the sons of God.
20
For the creation was subjected to futility, not willingly, but because of Him who subjected it in hope;
21
because the creation itself also will be delivered from the bondage of corruption into the glorious liberty of the children of God.

9
As Jesus passed on from there, He saw a man named Matthew sitting at the tax office. And He said to him, “Follow Me.” So he arose and followed Him.
10
Now it happened, as Jesus sat at the table in the house, that behold, many tax collectors and sinners came and sat down with Him and His disciples.
11
And when the Pharisees saw it, they said to His disciples, “Why does your Teacher eat with tax collectors and sinners?”
12
When Jesus heard that, He said to them, “Those who are well have no need of a physician, but those who are sick.
13
But go and learn what this means: ‘I desire mercy and not sacrifice.’ For I did not come to call the righteous, but sinners, to repentance.”