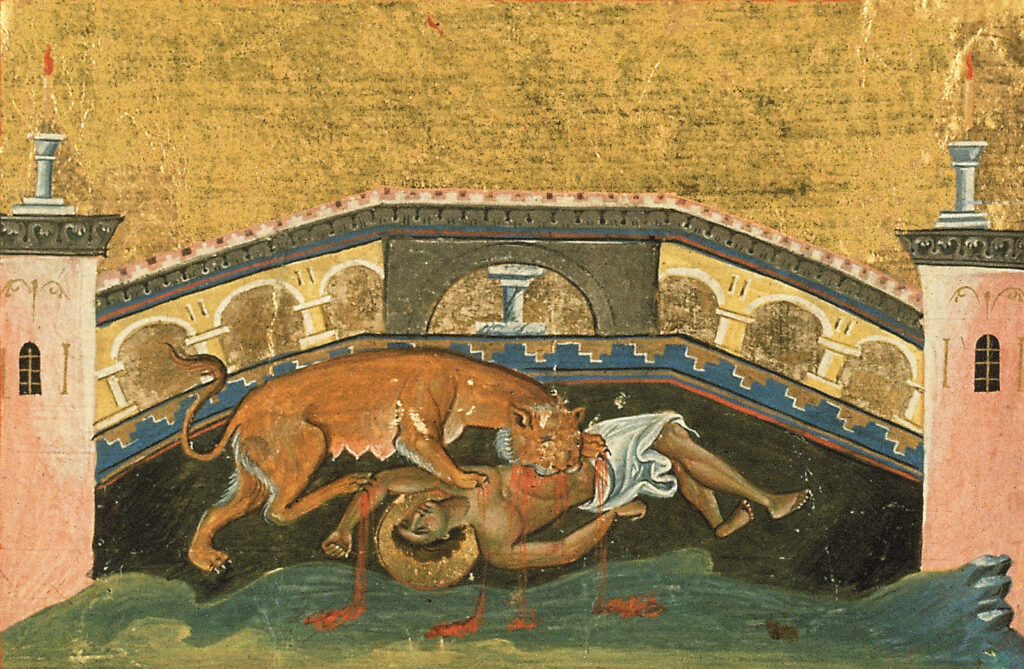 Hieromartyr Basil was a presbyter in Ancyra, Galatia. Fighting against the Arian heresy, he urged his flock to cling firmly to Orthodoxy. Because of this Saint Basil was deposed from his priestly rank by a local Arian council, but a Council of 230 bishops in Palestine reinstated him.

Saint Basil openly continued to preach and denounce the Arians. Therefore, he became the victim of persecution and was subjected to punishment as a man dangerous to the state. Two apostates, Elpidios and Pegasios, were ordered to turn Saint Basil from Orthodoxy. The saint remained unshakable, and was again subjected to tortures.

When the emperor Julian the Apostate (361-363) arrived in the city of Ancyra, Saint Basil bravely confessed Christ before him at the trial, and denounced the emperor for his apostasy. Julian ordered that strips of skin be cut from the saint’s back. Saint Basil endured the gruesome torture with great patience.

When they began to beat his shoulders and stomach with red-hot rods, he fell down upon the ground from the torments and cried out, “O Christ, my Light! O Jesus, my Hope! Quiet Haven from the stormy sea. I thank You, O Lord God of my fathers, that You have snatched my soul from the pit of Hell and preserved Your Name in me unstained! Let me finish my life a victor and inherit eternal life according to the promise You gave my fathers. Now accept my soul in peace, remaining steadfast in this confession! For You are merciful and great is Your mercy, You Who live and sojourn throughout all the ages. Amen.”

Having made such prayer, and lacerated all over by the red-hot rods, the saint fell into a sweet slumber, giving up his soul into the hands of God. The Hieromartyr Basil died June 29, 362. His commemoration was transferred to March 22 because of the Feast of Saints Peter and Paul.

This saint should not be confused with Saint Basil of Ancyra (January 1), a layman.

Through the inspiration of the Holy Spirit you worthily received the anointing of the priesthood, O Basil. / You offered your martyr’s contest / as a royal sacrifice to the King of the Ages. / Righteous Father, entreat Christ God to grant us His great mercy.

Having run the race in righteousness, / You preserved the faith, O Hieromartyr Basil. / For this you were made worthy of the crown of martyrdom, / And You have become an unshakable pillar of the Church, / Confessing the undivided Trinity: the Son, co-eternal with the Father and the Spirit. / Entreat Him to deliver those who honor you from distress, / That we may cry to you: Rejoice, O divinely wise Basil!

14
Therefore hear the word of the Lord, you scornful men, who rule this people who are in Jerusalem,
15
because you have said, “We have made a covenant with death, and with Sheol we are in agreement. When the overflowing scourge passes through, it will not come to us, for we have made lies our refuge, and under falsehood we have hidden ourselves.”
16
Therefore thus says the Lord God: “Behold, I lay in Zion a stone for a foundation, a tried stone, a precious cornerstone, a sure foundation; whoever believes will not act hastily.
17
Also I will make justice the measuring line, and righteousness the plummet; the hail will sweep away the refuge of lies, and the waters will overflow the hiding place.
18
Your covenant with death will be annulled, and your agreement with Sheol will not stand; when the overflowing scourge passes through, then you will be trampled down by it.
19
As often as it goes out it will take you; for morning by morning it will pass over, and by day and by night; it will be a terror just to understand the report.”
20
For the bed is too short to stretch out on, and the covering so narrow that one cannot wrap himself in it.
21
For the Lord will rise up as at Mount Perazim, He will be angry as in the Valley of Gibeon – that He may do His work, His awesome work, and bring to pass His act, His unusual act.
22
Now therefore, do not be mockers, lest your bonds be made strong; for I have heard from the Lord God of hosts, a destruction determined even upon the whole earth.

32
These were the families of the sons of Noah, according to their generations, in their nations; and from these the nations were divided on the earth after the flood.
1
Now the whole earth had one language and one speech.
2
And it came to pass, as they journeyed from the east, that they found a plain in the land of Shinar, and they dwelt there.
3
Then they said to one another, “Come, let us make bricks and bake them thoroughly.” They had brick for stone, and they had asphalt for mortar.
4
And they said, “Come, let us build ourselves a city, and a tower whose top is in the heavens; let us make a name for ourselves, lest we be scattered abroad over the face of the whole earth.”
5
But the Lord came down to see the city and the tower which the sons of men had built.
6
And the Lord said, “Indeed the people are one and they all have one language, and this is what they begin to do; now nothing that they propose to do will be withheld from them.
7
“Come, let Us go down and there confuse their language, that they may not understand one another’s speech.”
8
So the Lord scattered them abroad from there over the face of all the earth, and they ceased building the city.
9
Therefore its name is called Babel, because there the Lord confused the language of all the earth; and from there the Lord scattered them abroad over the face of all the earth.

19
A desire accomplished is sweet to the soul, but it is an abomination to fools to depart from evil.
20
He who walks with wise men will be wise, but the companion of fools will be destroyed.
21
Evil pursues sinners, but to the righteous, good shall be repaid.
22
A good man leaves an inheritance to his children’s children, but the wealth of the sinner is stored up for the righteous.
23
Much food is in the fallow ground of the poor, and for lack of justice there is waste.
24
He who spares his rod hates his son, but he who loves him disciplines him promptly.
25
The righteous eats to the satisfying of his soul, but the stomach of the wicked shall be in want.
1
The wise woman builds her house, but the foolish pulls it down with her hands.
2
He who walks in his uprightness fears the Lord, but he who is perverse in his ways despises Him.
3
In the mouth of a fool is a rod of pride, but the lips of the wise will preserve them.
4
Where no oxen are, the trough is clean; but much increase comes by the strength of an ox.
5
A faithful witness does not lie, but a false witness will utter lies.
6
A scoffer seeks wisdom and does not find it, but knowledge is easy to him who understands.