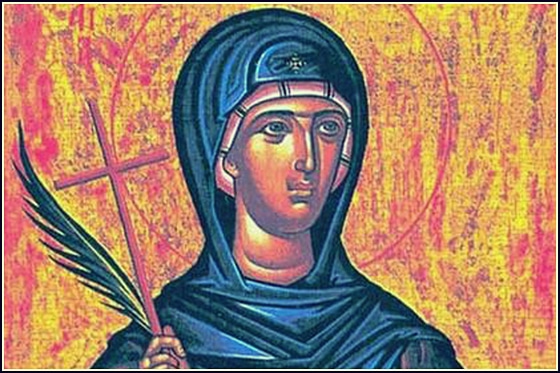 Martyr Matrona of Thessalonica (3rd-4th c.). Martyrs Manuel and Theodosius (304). Ven. John the Clairvoyant, Anchorite, of Egypt (394-395). The “GLYKOPHYLOUSA” and the “AKATHIST” Icons of the Most-holy Theotokos on Mt. Athos. 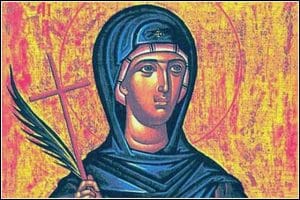 The Holy Martyr Matrona of Thessalonica suffered in the third or fourth century. She was a slave of the Jewish woman Pautila (or Pantilla), wife of one of the military commanders of Thessalonica. Pautila constantly mocked her slave for her faith in Christ, and tried to convert her to Judaism. Saint Matrona, who believed in Christ from her youth, still prayed to the Savior Christ, and secretly went to church unbeknownst to her vengeful mistress.

In a rage Pautila beat the martyr almost to death, then bound her even more tightly and locked her in the closet. The door was sealed so that no one could help the sufferer. The holy martyr remained there for four days without food or water, and when Pautila opened the door, she again found Saint Matrona free of her bonds, and standing at prayer.

Pautila flogged the holy martyr and left the skin hanging in strips from her body. The fierce woman locked her in the closet again, where Saint Matrona gave up her spirit to God.

Pautila had the holy martyr’s body thrown from the roof of her house. Christians took up the much-suffered body of the holy martyr and buried it. Later, Bishop Alexander of Thessalonica built a church dedicated to the holy martyr. Her holy relics, glorified by many miracles, were placed in this church.

The judgment of God soon overtook the evil Pautila. Standing on the roof at that very place where the body of Saint Matrona had been thrown, she stumbled and fell to the pavement. Her body was smashed, and so she received her just reward for her sin.

With undaunted spirit you preserved the Faith, / And your soul, Matrona, was not enslaved by the cruelty of your torturers. / You excelled in contest, slaying the crafty one / And were mystically wedded to the Lord of creation. / Fervently entreat him to deliver us from all harm!

Filled with the light of the Spirit, O Matrona, / you regarded your prison cell as a bridal chamber; / and from it you hastened to your radiant dwelling in the heavens, crying out: / “In divine love for You, O Word, I gladly endured scourgings.”

18
To whom then will you liken God? Or what likeness will you compare to Him?
19
The workman molds an image, the goldsmith overspreads it with gold, and the silversmith casts silver chains.
20
Whoever is too impoverished for such a contribution chooses a tree that will not rot; he seeks for himself a skillful workman to prepare a carved image that will not totter.
21
Have you not known? Have you not heard? Has it not been told you from the beginning? Have you not understood from the foundations of the earth?
22
It is He who sits above the circle of the earth, and its inhabitants are like grasshoppers, Who stretches out the heavens like a curtain, and spreads them out like a tent to dwell in.
23
He brings the princes to nothing; He makes the judges of the earth useless.
24
Scarcely shall they be planted, scarcely shall they be sown, scarcely shall their stock take root in the earth, when He will also blow on them, and they will wither, and the whirlwind will take them away like stubble.
25
“To whom then will you liken Me, or to whom shall I be equal?” says the Holy One.
26
Lift up your eyes on high, and see Who has created these things, Who brings out their host by number; He calls them all by name, by the greatness of His might and the strength of His power; not one is missing.
27
Why do you say, O Jacob, and speak, O Israel: “My way is hidden from the Lord, and my just claim is passed over by my God”?
28
Have you not known? Have you not heard? The everlasting God, the Lord, the Creator of the ends of the earth, neither faints nor is weary. His understanding is unsearchable.
29
He gives power to the weak, and to those who have no might He increases strength.
30
Even the youths shall faint and be weary, and the young men shall utterly fall,
31
but those who wait on the Lord shall renew their strength; they shall mount up with wings like eagles, they shall run and not be weary, they shall walk and not faint.

1
After these things the word of the Lord came to Abram in a vision, saying, “Do not be afraid, Abram. I am your shield, your exceedingly great reward.”
2
But Abram said, “Lord God, what will You give me, seeing I go childless, and the heir of my house is Eliezer of Damascus?”
3
Then Abram said, “Look, You have given me no offspring; indeed one born in my house is my heir!”
4
And behold, the word of the Lord came to him, saying, “This one shall not be your heir, but one who will come from your own body shall be your heir.”
5
Then He brought him outside and said, “Look now toward heaven, and count the stars if you are able to number them.” And He said to him, “So shall your descendants be.”
6
And he believed in the Lord, and He accounted it to him for righteousness.
7
Then He said to him, “I am the Lord, who brought you out of Ur of the Chaldeans, to give you this land to inherit it.”
8
And he said, “Lord God, how shall I know that I will inherit it?”
9
So He said to him, “Bring Me a three-year-old heifer, a three-year-old female goat, a three-year-old ram, a turtledove, and a young pigeon.”
10
Then he brought all these to Him and cut them in two, down the middle, and placed each piece opposite the other; but he did not cut the birds in two.
11
And when the vultures came down on the carcasses, Abram drove them away.
12
Now when the sun was going down, a deep sleep fell upon Abram; and behold, horror and great darkness fell upon him.
13
Then He said to Abram: “Know certainly that your descendants will be strangers in a land that is not theirs, and will serve them, and they will afflict them four hundred years.
14
“And also the nation whom they serve I will judge; afterward they shall come out with great possessions.
15
“Now as for you, you shall go to your fathers in peace; you shall be buried at a good old age.

7
The lips of the wise disperse knowledge, but the heart of the fool does not do so.
8
The sacrifice of the wicked is an abomination to the Lord, but the prayer of the upright is His delight.
9
The way of the wicked is an abomination to the Lord, but He loves him who follows righteousness.
10
Harsh discipline is for him who forsakes the way, and he who hates correction will die.
11
Hell and Destruction are before the Lord; so how much more the hearts of the sons of men.
12
A scoffer does not love one who corrects him, nor will he go to the wise.
13
A merry heart makes a cheerful countenance, but by sorrow of the heart the spirit is broken.
14
The heart of him who has understanding seeks knowledge, but the mouth of fools feeds on foolishness.
15
All the days of the afflicted are evil, but he who is of a merry heart has a continual feast.
16
Better is a little with the fear of the Lord, than great treasure with trouble.
17
Better is a dinner of herbs where love is, than a fatted calf with hatred.
18
A wrathful man stirs up strife, but he who is slow to anger allays contention.
19
The way of the lazy man is like a hedge of thorns, but the way of the upright is a highway.