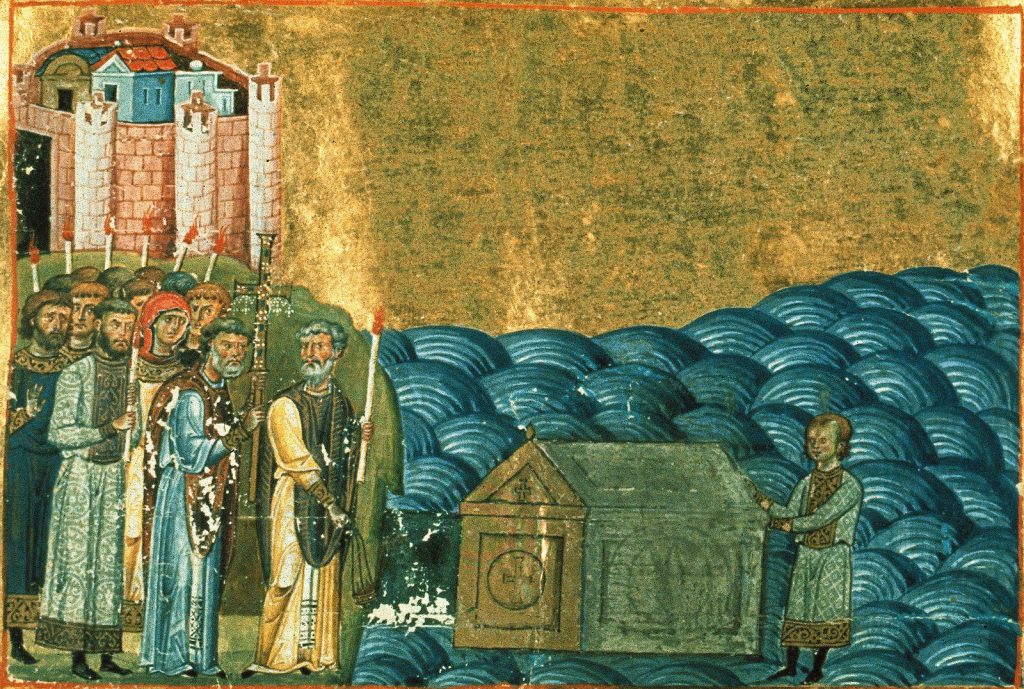 Leavetaking of the Entry Into the Temple. Holy Equal-to-the-Apostles Clement, Bishop of Ochrid and Enlightener of the Bulgarians (916). Hieromartyr Clement, Pope of Rome (101). Hieromartyr Peter, Archbishop of Alexandria (311). St. Peter Galata of Syria (ca. 429). 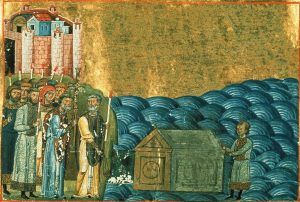 The Hieromartyr Clement, Pope of Rome, was born at Rome into a rich and illustrious family. Separated from his parents from childhood by force of circumstances, Clement was raised by strangers. Living in Rome, the youth received a fine education, he was surrounded by luxury, and had access to the imperial court. But these comforts brought him no joy, and pagan wisdom failed to attract him. He began to ponder the meaning of life.

When the news of Christ and His teaching began to reach the capital, Saint Clement left his home and estate and went to the lands where the Apostles were preaching. At Alexandria Saint Clement met the holy Apostle Barnabas, listening to his words with deep attention, and perceiving the power and truth of the Word of God. Arriving in Palestine, Saint Clement was baptized by the holy Apostle Peter and became his zealous disciple and constant companion, sharing his toil and sufferings with him. Shortly before his own sufferings and death, Saint Peter consecrated Saint Clement as Bishop of Rome. After the death of the Apostle Peter, Saint Linus (67-79) was the next Bishop of Rome, succeeded by Saint Anacletus (79-91), and then Saint Clement (92-101).

The virtuous life, charitable works and prayerful activity of Saint Clement converted many to Christ. He once baptized 424 people on the day of Pascha. Among the baptized were people of all social classes: slaves, officials, and even members of the imperial family.

The pagans, seeing the success of his apostolic preaching, denounced Saint Clement to the emperor Trajan (98-117), accusing the saint of insulting the pagan gods. The emperor banished Saint Clement from the capital, sending him to the Crimea, to work at a stone quarry near the city of Cherson. Many of the saint’s disciples followed after him voluntarily, preferring to go into exile rather than live without their spiritual Father.

When he arrived at the place of exile, Saint Clement found many Christian believers there, sentenced to labor under harsh conditions amidst a scarcity of water. He prayed together with the condemned, and the Lord appeared to him in the form of a lamb and revealed the location of a spring, from which gushed forth a veritable river of water. This miracle attracted a multitude of people to Saint Clement. Hearing the zealous preacher, hundreds of pagans were converted to Christ. Each day 500 or more men were baptized. And there in the stone quarry, a church was built, in which he served as priest.

The apostolic activity of the saint aroused the wrath of the emperor Trajan, and he ordered that Saint Clement be drowned. They threw the martyr into the sea with an anchor tied to his neck. This occurred in the year 101.

The saint’s faithful disciples Cornelius and Fibius asked the people to pray that the Lord would permit them to see the martyr’s body. The sea drew back a distance of three miles from the shore and the people walked out on the seabed until they found a marble cave shaped like a church. There they found the incorrupt body of their archpastor in this “Angelic Church” formed by God. After this, each year on the anniversary of Saint Clement’s martyric death the sea receded, and for seven days Christians were able to venerate his holy relics.

During the reign of the Byzantine Emperor Nicephorus (802-811), by divine providence, the sea failed to withdraw, and the relics of Saint Clement became inaccessible for fifty years. In the time of the emperor Michael and his mother Theodora (855-867), Saints Cyril and Methodius visited Cherson. When they learned of the concealed relics of Saint Clement, they asked Bishop George of Cherson to pray that the Lord would show them the relics of the hieromartyr.

Saints Cyril and Methodius walked along the shore in procession with the clergy who came with them from Constantinople. Through the fervent prayers of everyone gathered there, the holy relics of Saint Clement miraculously appeared on the surface of the sea at midnight. They solemnly took them to the Church of the Holy Apostles at Constantinople. A portion of the relics were then brought to Rome by Saints Cyril and Methodius, but a large portion of the relics was later brought to Kiev by the holy Prince Vladimir (July 15) and placed in the Desyatin-Tithe church, together with the relics of Saint Fibius, where a chapel dedicated to Saint Clement had been built. The hieromartyr Clement is widely venerated in Russia. From ancient times, many churches have been dedicated to him.

Saint Clement, who belongs to the Apostolic Fathers, has left to us a spiritual legacy (two Epistles to the Corinthians) the first written examples of Christian teaching after the writings of the holy Apostles.

Troparion of the feast, tone 4

Today is the prelude of the good will of God, of the preaching of the salvation of mankind. The Virgin appears in the temple of God, in anticipation proclaiming Christ to all. Let us rejoice / and sing to her: “Rejoice, O Fulfillment of the Creator’s dispensation.”

O God of our Fathers, always act with kindness towards us; take not Your mercy from us, but guide our lives in peace through the prayers of the hierarchs Clement and Peter.

Unshakeable and godlike towers of the Church, truly inspired and mighty pillars of the Faith, all-praised Clement and Peter, protect us all by your prayers.

Kontakion of the feast, tone 4

The most pure Temple of the Savior; the precious Chamber and Virgin; the sacred Treasure of the glory of God, is presented today to the house of the Lord. She brings with her the grace of the Spirit, therefore, the angels of God praise her: “Truly this woman is the abode of heaven.”

16
do not cease to give thanks for you, making mention of you in my prayers:
17
that the God of our Lord Jesus Christ, the Father of glory, may give to you the spirit of wisdom and revelation in the knowledge of Him,
18
the eyes of your understanding being enlightened; that you may know what is the hope of His calling, what are the riches of the glory of His inheritance in the saints,
19
and what is the exceeding greatness of His power toward us who believe, according to the working of His mighty power
20
which He worked in Christ when He raised Him from the dead and seated Him at His right hand in the heavenly places,
21
far above all principality and power and might and dominion, and every name that is named, not only in this age but also in that which is to come.
22
And He put all things under His feet, and gave Him to be head over all things to the church,
23
which is His body, the fullness of Him who fills all in all.

18
Then He said, “What is the kingdom of God like? And to what shall I compare it?
19
It is like a mustard seed, which a man took and put in his garden; and it grew and became a large tree, and the birds of the air nested in its branches.”
20
And again He said, “To what shall I liken the kingdom of God?
21
It is like leaven, which a woman took and hid in three measures of meal till it was all leavened.”
22
And He went through the cities and villages, teaching, and journeying toward Jerusalem.
23
Then one said to Him, “Lord, are there few who are saved?” And He said to them,
24
“Strive to enter through the narrow gate, for many, I say to you, will seek to enter and will not be able.
25
When once the Master of the house has risen up and shut the door, and you begin to stand outside and knock at the door, saying, ‘Lord, Lord, open for us,’ and He will answer and say to you, ‘I do not know you, where you are from,’
26
then you will begin to say, ‘We ate and drank in Your presence, and You taught in our streets.’
27
But He will say, ‘I tell you I do not know you, where you are from. Depart from Me, all you workers of iniquity.’
28
There will be weeping and gnashing of teeth, when you see Abraham and Isaac and Jacob and all the prophets in the kingdom of God, and yourselves thrust out.
29
They will come from the east and the west, from the north and the south, and sit down in the kingdom of God.