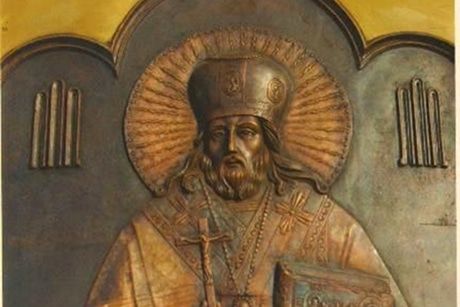 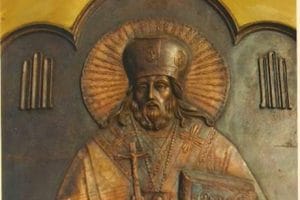 Saint Innocent, Bishop of Irkutsk, (in the world John) was descended from the noble Kulchitsky family. His parents moved from Volhynia to the Chernigov region in the mid-seventeenth century. The saint was born in about the year 1680, and educated at the Kiev Spiritual Academy. He accepted monastic tonsure in 1710 and was appointed an instructor at the Moscow Slavonic-Greek-Latin Academy as prefect and professor of theology.

On February 14, 1721, hieromonk Innocent was consecrated as Bishop of Pereyaslavl and appointed to the Peking Spiritual Mission in China. But the Chinese government refused to allow him to enter the country, because the Senate Commission on External Affairs had indiscretely characterized him as “a spiritual personage, a great lord.” The saint was compelled to spend three years at Selingin on the Chinese border, suffering much deprivation because of the uncertainty of his position, and grief from the disarray of the civil government in Siberia. Diplomatic blunders of the Russian Mission in China by Graf Raguzinsky, and intrigues by the Irkutsk archimandrite Anthony Platkovsky led to the appointment of Archimandrite Anthony in China. By decree of the Most Holy Synod Saint Innocent was named in 1727 to be Bishop of Irkutsk and Nerchinsk. And so he entered into the governance of the newly-formed dioceses.

The proximity of the Chinese border, the expanse and sparsely-settled dioceses, the great number of diverse nationalities (Buryat, Mongol, and others), mostly unenlightened by the Christian Faith, the lack of roads and the poverty—all this made Saint Innocent’s pastoral work burdensome and his life full of deprivations. Through a strange oversight of the Senate, he did not receive any money until the time of his death, and he endured extreme want. In these difficult conditions of scant funds, the Irkutsk Ascension monastery still maintained two schools opened under him, one Mongol and the other Russian. The constant concern of the saint was directed towards the schools: the selection of worthy teachers, and providing the necessary books, clothing and other provisions for students.

The saint toiled tirelessly at organizing the diocese, and strengthening its spiritual life. His many sermons, pastoral letters and directives bear witness to this. In his work and deprivations Saint Innocent found spiritual strength, humility, and insight.

In the spring of 1728, the Baikal region began to suffer a drought. Famine from a poor grain harvest had threatened the diocese already back in 1727. With the blessing of the holy hierarch, in May within the churches of Irkutsk and the Irkutsk region they began to include a Molieben for an end to the drought at each Liturgy. On Saturdays they sang an Akathist to the Mother of God, and on Sundays they served a Molieben. “The supplications,” said the saint, “should end on the Feast of Saint Elias” (July 20). Indeed, on that very day a storm raged at Irkutsk with such strong rains, that in the streets of the city water stood up to people’s knees, and thus the drought ended.

Through the efforts of Saint Innocent, construction was started on a stone church to replace the wooden one at the Ascension monastery, and the boundaries of the diocese were expanded to include not only Selingin, but also the Yakutsk and Ilimsk surroundings.

The saint, not noted for robust health, and under the influence of the severe climate and his afflictions, departed to the Lord at a rather young age (51). He reposed on the morning of November 27, 1731.

In the year 1764, the body of the saint was discovered incorrupt during restoration work on the monastery’s Tikhvin church. Many miracles occurred not only at Irkutsk, but also in remote places of Siberia, for those who flocked to the saint with prayer. This moved the Most Holy Synod to uncover the relics and to glorify the saint in the year 1800.

In the year 1804, a feastday was established to celebrate his memory throughout all Russia on November 26, since the Sign Icon of the Mother of God is commemorated on the actual day of his repose (November 27). Saint Innocent is also remembered on February 9.

In 1921, the relics of Saint Innocent were taken from their shrine and placed in a Soviet anti-religious museum. They were moved to another museum in Yaroslav in 1939, and were exhibited as “mummified remains of an unknown man.” In 1990, they were brought to the newly-reopened Tolga Monastery in the Yaroslav diocese. In September of 1990, the holy relics arrived in Irkutsk and were placed in the cathedral, to the joy of all the faithful.

Troparion of the Sunday, tone 3

Let the heavens rejoice, let the earth be glad! For the Lord has shown might with His arm, He has trampled down death by death. He has become the first-born of the dead. He has delivered us from the depths of hell, and has granted the world great mercy!

Radiant light of the church, You illumined the earth by your deeds. Those who drew near to you in faith, you healed and so glorified God. Therefore, O holy Father Innocent, we beseech you, Encompass this land with your prayers, And protect us from all harm and misdeed.

The Trinity delights in you O Holy Bishop Innocent. You are divine thunder, a spiritual trumpet, A planter of the faith and destroyer of heresies. As you ever stand with the angels, Entreat without ceasing for us all!

Kontakion  of the Sunday, tone 3

On this day Thou didst rise from the tomb, O Merciful One, leading us from the gates of death. On this day Adam exults as Eve rejoices; with the prophets and patriarchs they unceasingly praise the divine majesty of Thy power!

12
Then as He entered a certain village, there met Him ten men who were lepers, who stood afar off.
13
And they lifted up their voices and said, “Jesus, Master, have mercy on us!”
14
So when He saw them, He said to them, “Go, show yourselves to the priests.” And so it was that as they went, they were cleansed.
15
And one of them, when he saw that he was healed, returned, and with a loud voice glorified God,
16
and fell down on his face at His feet, giving Him thanks. And he was a Samaritan.
17
So Jesus answered and said, “Were there not ten cleansed? But where are the nine?
18
Were there not any found who returned to give glory to God except this foreigner?
19
And He said to him, “Arise, go your way. Your faith has made you well.”