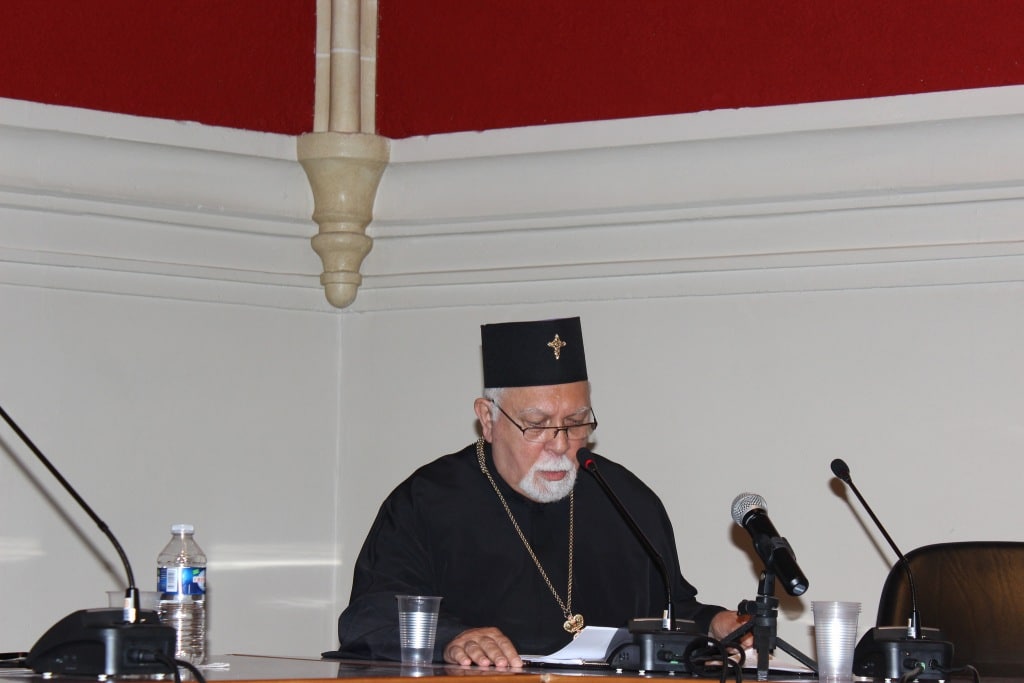 We received a reflection on the situation of the Orthodox Church in the Ukraine from Metropolitan Stephanos, Primate of the Autonomous Church of Estonia (jurisdiction of the Ecumenical Patriarchate).

“It is no longer a secret that the Ecumenical Patriarchate of Constantinople has decided to grant autocephaly to the Orthodox Christians of the Ukraine (Synod of 20 April, 2018). This decision is his exclusive responsibility (canons 9, 17 and 28 of the 4th Ecumenical Council).

This decision was basically required by what has been happening in the Ukraine for 25 years: a so-called “canonical” church, under the jurisdiction of the Moscow Patriarchate, and two so-called “schismatic” jurisdictions, under the aegis of Patriarch Filaret and Metropolitan Macarius. This is enough to challenge and severely test the communion between all those who confess the Orthodox faith in this country. And not only that, as the whole social common good is endangered by this endless crisis. One should be blind or dangerously insensitive not to recognize that the violence and abuses undergone almost daily by our Orthodox brothers and sisters in the Ukraine are no longer acceptable, bearable or justifiable.

Patriarch Bartholomew, who enjoys primacy in all of Orthodoxy, can no longer just keep quiet. Of course, he does not have any temporal power, but he has the exclusive responsibility to take initiatives in order to ensure unity, universality, and peace within Orthodoxy; to summon the other Orthodox Churches; and finally, to serve as recourse for all communities in exceptional and dangerous situations. The primacy of the ecumenical patriarch of Constantinople is therefore neither an empty honor nor a sort of “oriental papacy”, as some Orthodox ecclesiastical leaders keep repeating it urbi et orbi. It does not pretend to offer a “universal bishop” to the Orthodox Church. But, as the well-known Orthodox theologian John Meyendorff pointed out, it is undeniable that the Orthodox Church cannot deny the need for leadership at the level of the universal episcopate, nor the need for a kind of authority of the first patriarch as a spokesman. These are essential conditions for conciliarity.

With all due respect to some people: in these highly chaotic times for the Ukrainian Orthodox, and shamefully so, the Orthodox Church cannot do without this wise, objective, and authoritative leadership of the Ecumenical Patriarchate of Constantinople. It is therefore not sufficient to say that the ecumenical patriarch is merely a primus inter pares. This is a rather “political” argument in order to weaken his authority, an argument that does not rely on any canonical or ecclesiological foundation. The honor due to him implies responsibilities and real prerogatives. Let us remind it to those who refuse to hear, this primacy belongs solely to the Church of Constantinople, by canonical dispositions and because of a long historical experience, and not by the desire of any Byzantine emperor or tsar. No civil or religious institution, however prestigious it may be, has the power to distort or interpret as they wish what our saints and Godbearing Fathers in the faith decreed in the Ecumenical Councils.

De jure after Prince of Kyiv Vladimir’s baptism in 988, Kievan Rus’ was in the ecclesial jurisdiction of the Ecumenical Patriarchate of Constantinople. Moreover, Constantinople never recognized the annexation of the metropolis of Kyiv in 1686 by the synod of the Russian Church, after the Russian invasion of the lands located on the left bank of the Dnieper River. The only concession made at the time by the Ecumenical Patriarch Denis IV was to allow the Metropolitan of Moscow to ordain the Metropolitan of Kyiv, on the express condition that only the Ecumenical Patriarch of Constantinople would be commemorated at each liturgical celebration. The document attesting this still exists. It was recently found in its original Greek version in Paris (in “Lettre du patriarche Denis IV à l’adresse des tsars de Russie Jean et Pierre et de Sophie Alexiogievitch ” – Moscow 1826). It confirms word for word that this anti-canonic action by the Russian Church was never endorsed by the ecumenical patriarchate.

The initiative taken by His Holiness Bartholomew to put an end to this situation and which directly involves his authority, thus highlights on the international scene the inability of the Russian Orthodox Church to create, especially since the fall of communism in 1991, a single proposal and a single solution likely to put an end to the divisions existing between local Orthodox jurisdictions, and to completely eliminate existing schisms.

According to Antoine Arjakovsky (in Conference of European Churches Symposium – Cyprus, November, 8-10, 2017), three-quarters of the 25 million Ukrainian Orthodox Christians are currently under the jurisdiction of the Kyiv Patriarchate, led by Patriarch Filaret. In addition, it is estimated that, out of the remaining quarter (the Moscow Patriarchate under the leadership of Metropolitan Onufriy and the so-called Autocephalous Church under the leadership of Metropolitan Macarius), more than 75 per cent would join this new ecclesial structure that would be “the Autocephalous Orthodox Church of the Ukraine”.

Unquestionably, the anti-canonical control of the Russian Orthodox Church over the Church in the Ukraine (1686) –to which, unfortunately, we can now add Russia’s annexation of Crimea and the military occupation of Donbass– turns against her today, like a boomerang that returns to its starting point and may seriously harm its thrower if they are not careful.

I was quite astonished, but not at all surprised, by the decision of Patriarch Kirill of Moscow and of his Holy Synod to break communion with Patriarch Bartholomew. If I compare the current situation with what happened in Estonia in 1996, this decision is more than distressing. Ultimately, in order to resolve the Estonian crisis, they came to an agreement in Zurich that same year and proposed a solution that could have launched a constructive common future between the two local jurisdictions (Constantinople and Moscow), if both sides had respected it. More than twenty years later, this agreement has become obsolete and is therefore not applicable, because the Moscow Patriarchate alone did not apply it. After that, who could still think we can trust people who first sign, but then do not respect their commitment?

Out of respect for his person and his function, I do not want to argue with Patriarch Kirill. But I cannot keep quiet about this outrageous habit, now classic in his Church, to break communion so lightly in order to put pressure on others so that his whims get satisfied. Within two years, Patriarch Kirill committed two major mistakes. The first was his absence from the holy and great Panorthodox Council of Crete (2016). The second is to break communion with Patriarch Bartholomew, once more since the incident in Estonia.

But is he really aware that one can never negotiate over what is invaluable, in this case Eucharistic communion, without risking fragmenting the Church of Christ? And that the one and unique Church is made up of each Church and of all the churches together? To break communion with the Ecumenical Patriarch of Constantinople (whose authority was founded and confirmed by the canons of the Ecumenical Councils: 3rd canon of the Second Ecumenical Council, 28th canon of the Fourth Ecumenical Council, 36th canon of the Council in Trullo) is to break with the unity of the local Churches in the body of the one Orthodox Church. I would adhere that the canonical tradition offers no other alternative than that of rigor (acribie) in ecclesiology, even if it is constantly scorned at nowadays. It is therefore the Ecumenical Patriarch’s responsibility, as the guardian of this acribie, to protect it and to ensure its proper application.

The fact of not recognizing the Patriarch Bartholomew as “protos (first)” by refusing at the last moment to go to the Council of Crete and now by breaking communion with him, already places Patriarch Kirill in a state of schism. How can a man of his intelligence and quality not see or understand this?

In the case of Estonia, the first move was made by Constantinople, and it is all in its honor, so that the evil would not perpetuate itself. But in the present case, who will make that move, as since 2004 the Church of Russia has been provoking and humiliating Constantinople, constantly and publicly challenging the authority of the Ecumenical Patriarch of Constantinople with the obvious goal of becoming the third Rome?

Orthodox Ukraine will become autocephalous, it is obvious. The prophetic gesture of Bartholomew will be productive in the long run, especially as “she is her direct daughter, the living fruit of her missionary work, and a place of future reconciliation with the Church of Moscow” (Antoine Arjakovsky, loc. cit.).

+ Stephanos, metropolitan of Tallinn and all Estonia. “