“Today, the Ukrainian Orthodox Church is experiencing times of hardship, but they are profitable to it,” said Metropolitan Onufriy of Kyiv during his meeting with ambassadors and representatives of embassies in Ukraine from countries mostly confessing the Orthodox faith. 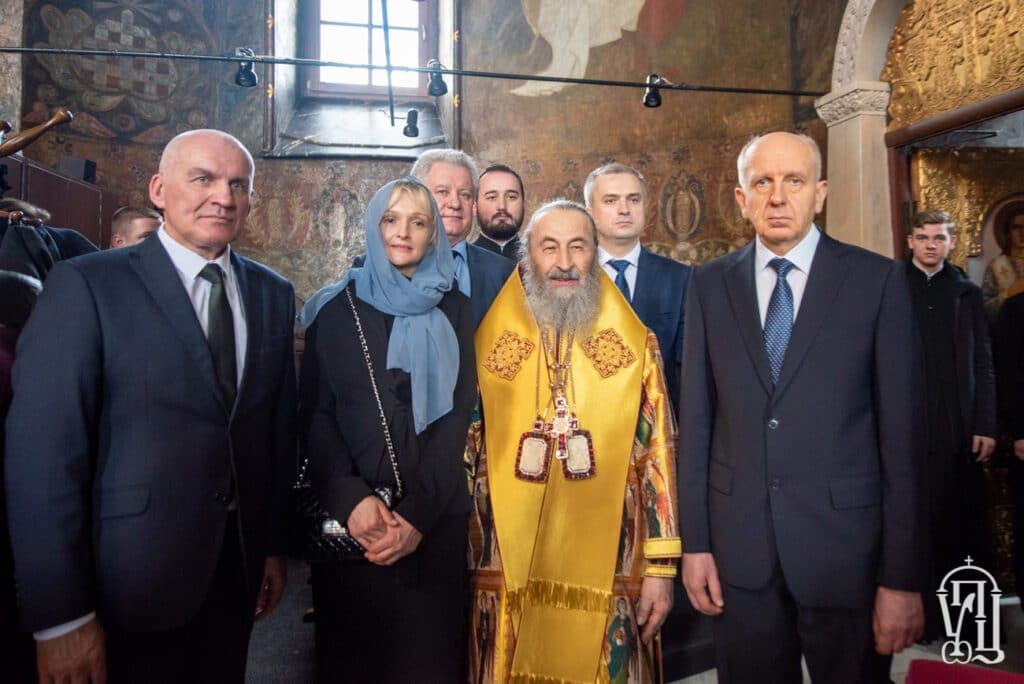 Today, the Ukrainian Orthodox Church is experiencing times of hardship, but they are profitable to it. This is what Metropolitan Onufriy of Kyiv said during his meeting with ambassadors and representatives of embassies in Ukraine from countries mostly confessing the Orthodox faith. The reception of the diplomats took place in the residence of the Primate of the Ukrainian Orthodox Church, in the Kyiv Monastery of the Caves, after the festive celebration of Triumph of Orthodoxy Sunday.
The event was attended by Igor Sokol, the Ambassador of the Republic of Belarus in Ukraine; Vassilios Bakalis, the Counselor of the Greek Embassy in Ukraine; Ion Bularga, the First Secretary of the Embassy of the Republic of Moldova in Ukraine; Alexander Lukashik, the temporary charge d’affaires of the Russian Federation in Ukraine; Cosmin Ciprian Jurka, the adviser and head of the consular section of the Romanian Embassy in Ukraine; and Svetlana Košutović, the first counselor of the Embassy of the Republic of Serbia in Ukraine.

“Since our last meeting with you a year ago, here in this holy Lavra, our Ukrainian Orthodox Church and Orthodoxy all over the world have been facing serious challenges, as you all know,” said Metropolitan Onufriy to the diplomats. “Today, our Ukrainian Orthodox Church is experiencing times of hardship. However, they are profitable to the Church. Churches are taken away from us, but our communities remain faithful to the Church and are getting stronger. Our Church is being slandered, but our churches are filled with people who do not believe in lies, but rather seek the truth. As the holy Apostle Paul said, “Being reviled, we bless; being persecuted, we endure; being defamed, we entreat” (1 Cor 4:12-13). Why isn’t the Church disappearing? Why isn’t Orthodoxy perishing? Because the Church was created by the Lord and God Himself, our Savior Jesus Christ, who said that the very gates of hell would not prevail against the Church (Mt 16:18). Because the Church is the creation of divine hands, not human ones.
My deepest conviction is that if the Lord had not created the Holy Church and had not acquired it by His own blood (see Acts 20:28) 2,000 years ago, it is possible our world would no longer exist today. The end of human history would have begun a long time ago. But the Lord, through His coming, through His death on the Cross and His resurrection, and through His teaching, gave new life to this world. Yes, sin has been continuing to exist in the world, but as we know from Holy Scripture, “where sin abounded, grace abounded much more” (Romans 5:20).
Today, our world needs holiness, and you can find it in the Church. Politicians or statesmen, and in general men with a secular mind, often consider the Church only as a kind of social or ideological force. In so doing, they ignore or do not understand its mystical and spiritual nature. The Church has obviously great potential, but if the Church only transforms itself into a social or ideological structure, by serving someone’s earthly interests, and forgets its heavenly and divine origin, it loses its strength, it loses the evangelical salt the Savior spoke about. Then the Church ceases to be the Church. And the hearts of the faithful can feel this in a very subtle way.
That’s why our churches are actually full, as we have seen today. Because the Church has not lost its strength. Because the Church has not ceased to be the source of divine grace. Because the Church has not ceased to be the well of living water, to which all the believing souls come to quench their spiritual thirst. “As the deer longs for the springs of living waters, so my soul longs for You, O God ! My soul thirsts for the living God” (Ps. 41:2-3), says the holy prophet David.

Your Excellencies, Ambassadors and representatives of the embassies of Orthodox countries, I consider that on this day, we must remember the strength and significance of the Church and of our Orthodox faith. We must remember the meaning of the Church, as the place of God’s presence on earth, in our peoples and our nations. Of course, where God acts and sows His good seeds, the devil immediately tries to sow his weeds, as it is said in the Gospel parable. Good and evil are present in this world and grow in parallel, but this must not upset us, because God is present and acts among us, and we are called to be His collaborators, we are called to be on the side of good, on the side of God.
It seems to me that as long as there is the Orthodox Church in our countries, by which the Lord calls our nations to Himself, we will be preserved in history, we will not disappear. The history of many of our Orthodox nations who were for a long time under the power of the heterodox and did not have their own sovereignty, and then established it or received it, while keeping their faithfulness to God and to His Holy Church, is a good example.”

At the end of his address, Metropolitan Onufriy asked the diplomats to convey his greetings to the Primates of their respective Churches. He also wished for “the Lord to keep all our local Orthodox Churches in unity, to help overcome all schisms and problems, and to keep our peoples, our nations and all of us, His servants and faithful children, in peace and unanimity”.