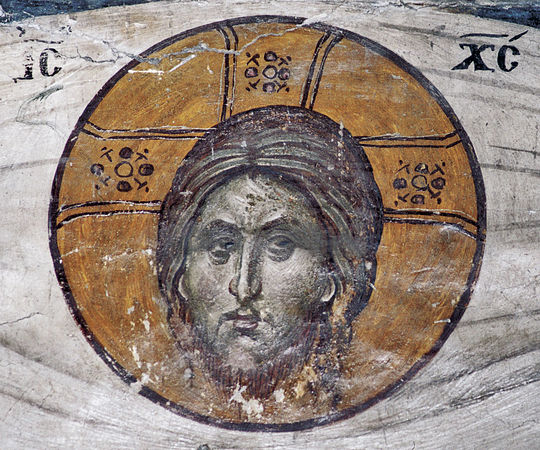 Afterfeast of the Dormition.
Translation of the Image “Not-made-by-hands” of our Lord Jesus Christ from Edessa to Constantinople (944).(Third “Feast of the Savior in August”). Martyr Diomedes the Physician of Tarsus in Cilicia (298). Ven. Cherimon (Chæremon) of Egypt (4th c.). The “FEODOROVSKAYA” Icon of the Most-holy Theotokos (1239).

Translation of the Image “Not-Made-By-Hands” of our Lord Jesus Christ from Edessa to Constantinople, the Third “Feast of the Savior in August”

The Transfer from Edessa to Constantinople of the Icon of our Lord Jesus Christ Not-Made-by-Hands occurred in the year 944. Eusebius, in his HISTORY OF THE CHURCH (I:13), relates that when the Savior was preaching, Abgar ruled in Edessa. He was stricken all over his body with leprosy. Reports of the great miracles worked by the Lord spread throughout Syria (Mt.4:24) and reached even Abgar. Without having seen the Savior, Abgar believed in Him as the Son of God. He wrote a letter requesting Him to come and heal him. He sent with this letter to Palestine his own portrait-painter Ananias, and commissioned him to paint a likeness of the Divine Teacher.

Ananias arrived in Jerusalem and saw the Lord surrounded by people. He was not able to get close to Him because of the large throng of people listening to the preaching of the Savior. Then he stood on a high rock and attempted to paint the portrait of the Lord Jesus Christ from afar, but this effort was not successful. The Savior saw him, called to him by name and gave him a short letter for Abgar in which He praised the faith of this ruler. He also promised to send His disciple to heal him of his leprosy and guide him to salvation.

Then the Lord asked that water and a cloth be brought to Him. He washed His Face, drying it with the cloth, and His Divine Countenance was imprinted upon it. Ananias took the cloth and the letter of the Savior to Edessa. Reverently, Abgar pressed the holy object to his face and he received partial healing. Only a small trace of the terrible affliction remained until the arrival of the disciple promised by the Lord. He was Saint Thaddeus, Apostle of the Seventy (August 21), who preached the Gospel and baptized Abgar and all the people of Edessa. Abgar put the Holy Napkin in a gold frame adorned with pearls, and placed it in a niche over the city gates. On the gateway above the icon he inscribed the words, “O Christ God, let no one who hopes on Thee be put to shame.”

For many years the inhabitants kept a pious custom to bow down before the Icon Not-Made-by-Hands, when they went forth from the gates. But one of the great-grandsons of Abgar, who later ruled Edessa, fell into idolatry. He decided to take down the icon from the city wall. In a vision the Lord ordered the Bishop of Edessa to hide His icon. The bishop, coming by night with his clergy, lit a lampada before it and walled it up with a board and with bricks.

Many years passed, and the people forgot about it. But in the year 545, when the Persian emperor Chozroes I besieged Edessa and the position of the city seemed hopeless, the Most Holy Theotokos appeared to Bishop Eulabius and ordered him to remove the icon from the sealed niche, and it would save the city from the enemy. Having opened the niche, the bishop found the Icon Not-Made-by-Hands: in front of it was burning the lampada, and upon the board closing in the niche, a copy of the icon was reproduced. After a church procession with the Icon Not-Made-by-Hands had made the circuit of the city walls, the Persian army withdrew.

In the year 630 Arabs seized Edessa, but they did not hinder the veneration of the Holy Napkin, the fame of which had spread throughout all the East. In the year 944, the emperor Constantine Porphyrogenitos (912-959) wanted to transfer the icon to the Constantinople, and he paid a ransom for it to the emir of the city. With great reverence the Icon of the Savior Not-Made-by-Hands and the letter which He had written to Abgar, were brought to Constantinople by clergy.

On August 16, the icon of the Savior was placed in the Tharossa church of the Most Holy Theotokos. There are several traditions concerning what happened later to the Icon Not-Made-by-Hands. According to one, crusaders ran off with it during their rule at Constantinople (1204-1261), but the ship on which the sacred object was taken, perished in the waters of the Sea of Marmora.

Troparion of the Feast, tone 2

We venerate Your most pure image, O Good One, and ask forgiveness of our transgressions, O Christ God. Of Your own will You were pleased to ascend the Cross in the flesh to deliver Your creatures from bondage to the Enemy. Therefore with thanksgiving we cry aloud to You: “You have filled all with joy, O our Savior, by coming to save the world.”

Kontakion of the feast, tone 2

Uncircumscribed Word of the Father as we behold the victorious image of Your true incarnation, not made by hands, but divinely wrought in Your ineffable and divine dispensation towards us, we honor it with veneration!

51
Now it came to pass, when the time had come for Him to be received up, that He steadfastly set His face to go to Jerusalem,
52
and sent messengers before His face. And as they went, they entered a village of the Samaritans, to prepare for Him.
53
But they did not receive Him, because His face was set for the journey to Jerusalem.
54
And when His disciples James and John saw this, they said, “Lord, do You want us to command fire to come down from heaven and consume them, just as Elijah did?”
55
But He turned and rebuked them, and said, “You do not know what manner of spirit you are of.
56
For the Son of Man did not come to destroy men’s lives but to save them.” And they went to another village.
22
All things have been delivered to Me by My Father, and no one knows who the Son is except the Father, and who the Father is except the Son, and the one to whom the Son wills to reveal Him.”
23
Then He turned to His disciples and said privately, “Blessed are the eyes which see the things you see;
24
for I tell you that many prophets and kings have desired to see what you see, and have not seen it, and to hear what you hear, and have not heard it.”