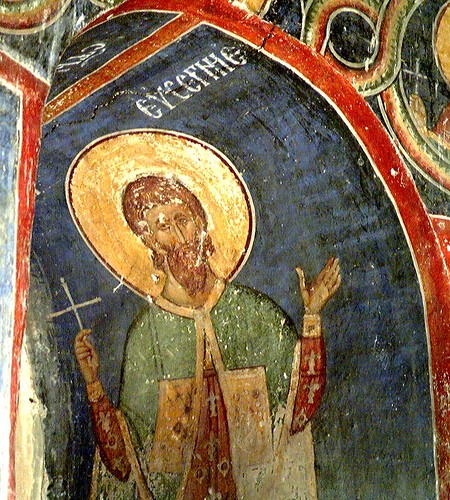 Saint Eusignius retired in his old age from military service and returned to his own country. There he spent his time in prayer, fasting, and attending the church of God. So he lived until the reign of Julian the Apostate (361-363), who yearned for a return to paganism. Through the denunciation of one of the Antiochian citizens, Saint Eusignius stood trial as a Christian before the emperor Julian in the year 362. He fearlessly accused the emperor of apostasy from Christ, and reproached him with the example of his relative, Constantine the Great, and he described in detail how he himself had been an eyewitness to the appearance of the sign of the Cross in the sky. Julian did not spare the aged Saint Eusignius, then 110 years old, but ordered him beheaded.

Troparion of the saint, Tone 8
Today the Church honors a man martyred for his piety and devotion:  The sincere and Godly-minded Eusignius the Wise. She glorifies his spiritual struggles, and cries out fervently: O Most Merciful One, guard Your servants through his intercessions!

Troparion for the Forefeast of the Transfiguration, tone 4
Come, you faithful, let us welcome the Transfiguration of Christ, and let us joyfully cry as we celebrate the prefeast: “The day of holy gladness has come; the Lord has ascended Mount Tabor to radiate the beauty of His divinity.”

Kontakion for the Forefeast of the Transfiguration, tone 4
Today all mortal nature shines with the divine Transfiguration and cries with exultation: “Christ the Savior is transfigured to save us all!”