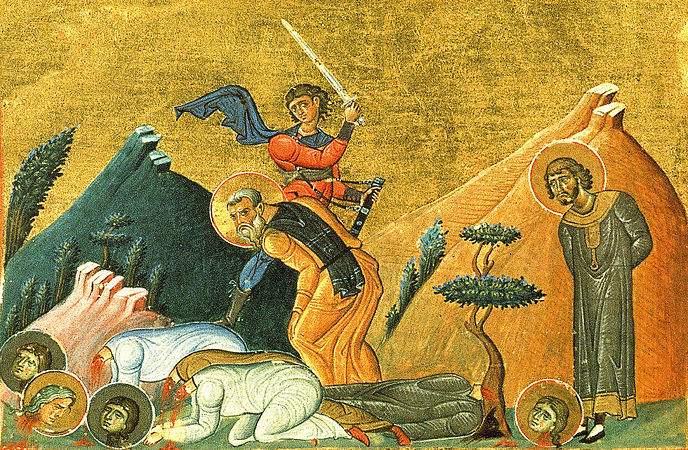 Holy Wonderworkers and Unmercenaries Cyrus and John, and with them Martyrs Athanasia and her daughters: Theoctiste, Theodotia, and Eudoxia, at Canopus in Egypt (311). Ven. Nikita of the Kiev Caves, Bishop of Novgorod (1108). Martyrs Victorinus, Victor, Nicephorus, Claudius, Diodorus, Serapion, and Papias, of Egypt (251). Martyr Tryphænes at Cyzicus. St. Arsenios of Paros (1877). 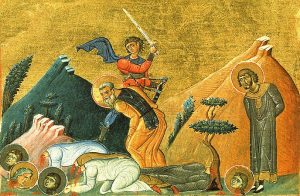 Saint Cyrus was a noted physician in the city of Alexandria, where he had been born and raised. He was a Christian and he treated the sick without charge, not only curing their bodily afflictions, but also healing their spiritual infirmities. He would say, “Whoever wishes to avoid being ill should refrain from sin, for sin is often the cause of bodily illness.” Preaching the Gospel, the holy physician converted many pagans to Christ. During the persecution by Diocletian (284-305), Saint Cyrus withdrew into Arabia, where he became a monk. He continued to heal people by his prayer, having received from God the gift to heal every sickness.

In the city of Edessa at this time lived the soldier John, a pious Christian. When the persecution started, he went to Jerusalem and there he heard about Saint Cyrus. He began to search for him, going first to Alexandria and then to Arabia. When Saint John finally found Saint Cyrus, he remained with him and became his faithful follower.

They learned of the arrest of the Christian woman Athanasia and her three young daughters. Theoctiste was fifteen; Theodota, was thirteen; and Eudoxia, was eleven. Saints Cyrus and John hastened to the prison to help them. They were concerned that faced with torture, the women might renounce Christ.

Saints Cyrus and John gave them courage to endure what lay before them. Learning of this, the ruler of the city arrested Saints Cyrus and John, and seeing their steadfast and fearless confession of faith in Christ, he brought Athanasia and her daughters to witness their torture. The tyrant did not refrain from any form of torture against the holy martyrs. The women were not frightened by the sufferings of Saints Cyrus and John, but courageously continued to confess Christ. They were flogged and then beheaded, receiving their crowns of martyrdom.

At the same place they executed the Holy Unmercenaries Cyrus and John. Christians buried their bodies in the church of the holy Evangelist Mark. In the fifth century the relics of Saints Cyrus and John were transferred from Canopis to Manuphin. Later on their relics were transferred to Rome, and from there to Munchen (Munich) (another account is located under June 28).

Saints Cyrus and John are invoked by those who have difficulty in sleeping.

Troparion of the saints, tone 5

You have given us the miracles of Your martyrs, Cyrus and John, / as an invincible rampart; / through their prayers, frustrate the plans of the heathens, / and strengthen the faith of the Orthodox Christians, / for You alone are good and love mankind.

Kontakion of the saints, tone 3

Having received the gift of miracles through divine grace, O saints, / you work wonders in the world unceasingly. / You remove all of our passions through your invisible surgery, / divinely-wise Cyrus and glorious John, / for you are truly divine physicians.