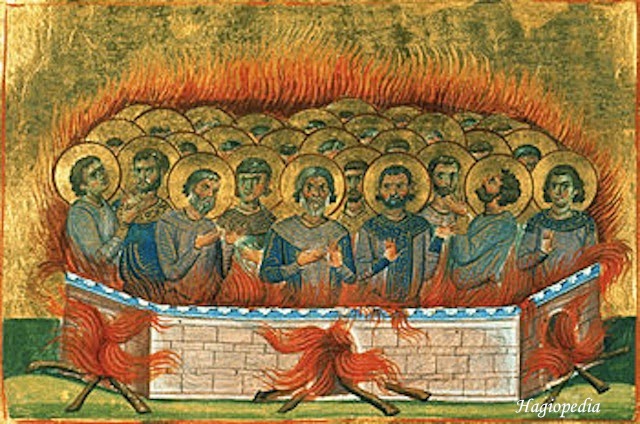 Ven. Anthony of the Kiev Caves, Founder of Monasticism in Russia (1073). Holy 45 Martyrs at Nicopolis in Armenia, including Leontius, Maurice, Daniel, Anthony, Alexander, Sisinius, Meneus, and Belerad (Verelad—ca. 319). The Placing of the Honorable Robe of the Lord at Moscow (1625). Ven. Silvanus, Schema-monk, of the Kiev Caves (Far Caves—13th-14th c.). Martyr Apollonius of Sardis (3rd c.). Martyrs Bianor and Silvanus of Pisidia (4th c.). 10,000 Fathers of the deserts and caves of Scete martyred by the impious Patriarch Theophilus of Alexandria (ca. 398). Martyr Nicodemus of Elbassan (Albanian—1722). Monk Martyr Nectarius of St. Anne Skete (Mt. Athos—1820). The KONEVSKAYA Icon of the Most-holy Theotokos. 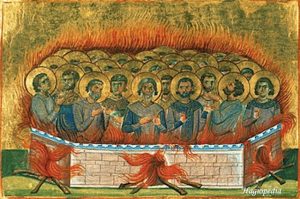 The Forty-five Martyrs of Nicopolis in Armenia suffered during the reign of Emperor Licinius (311-324), who was then co-regent with Saint Constantine the Great (May 21). Licinius, the ruler of the Eastern Empire, fiercely persecuted Christians and issued an edict to put to death any Christian who would not return to paganism. When the persecutions began at Nicopolis, more than forty of those being persecuted for Christ decided to appear voluntarily before their persecutors, to confess openly their faith in the Son of God, and to accept martyrdom. The holy confessors were headed by Leontius, Mauricius, Daniel, Anthony, Alexander, Sisinius, Meneus, and Belerad (Virilad), and they were distinguished by their virtuous life.

Lycias, the procurator of the Armenian district, before whom the holy confessors presented themselves, was amazed at the boldness and bravery of those who condemned themselves voluntarily to torture and death. He tried to persuade them to renounce Christ and offer sacrifice to the pagan gods, but the saints remained steadfast. They refuted all the ruler’s arguments, pointing out to him the falseness of their vile and vice-filled pagan gods, leading those who worship them to ruin. The procurator ordered the confessors to be beaten about the face with stones, and then to be shackled and imprisoned.

In the prison the saints rejoiced and sang the Psalms of David. Saint Leontius inspired and encouraged the brethren, preparing them to accept new tortures for the true Faith, and telling them of the bravery of all those who had suffered previously for Christ. In the morning, after repeated refusals to offer sacrifice to the idols, the saints were subjected to further tortures.

Saint Leontius, seeing the intense suffering of the martyrs, and fearful that some of them might falter and lose faith, prayed to God that these torments would end quickly for all of them.

When the holy martyrs were singing Psalms at midnight, an Angel of the Lord suddenly appeared to them, and the prison blazed with light. The Angel declared to the martyrs that their contest was coming to an end, and their names already were inscribed in Heaven. Two of the prison guards, Meneus and Virilad, saw what was happening and believed in Christ.

On the following morning, Lysias decided to ask them if they had changed their minds and were willing to worship the idols. With one mouth, the Saints replied: “We are Christians! We are Christians!” Insane with rage, Lysias ordered that their hands and feet be cut off, and then threw them into the fire. After this, their bones were tossed into a river. Later on, when freedom had been given to the Church of Christ, a church was built on the spot and was dedicated to the 45 Holy Martyrs of Nikopolis.

You were chosen from on high as a holy army, / O Forty-five Martyrs of Christ, / lawfully contesting for the glory of Christ, / and by your struggles you freed us from the delusion of polytheism. / Because of these struggles, we glorify all of you.

Kontakion of the saints, tone 8

You endured many torments for the sake of Christ, O Martyrs. / You destroyed idolatrous polytheism and godless error by the power of Christ. / Teach us to cry aloud with faith: Alleluia.

1
Paul, called to be an apostle of Jesus Christ through the will of God, and Sosthenes our brother,
2
to the church of God which is at Corinth, to those who are sanctified in Christ Jesus, called to be saints, with all who in every place call on the name of Jesus Christ our Lord, both theirs and ours:
3
Grace to you and peace from God our Father and the Lord Jesus Christ.
4
I thank my God always concerning you for the grace of God which was given to you by Christ Jesus,
5
that you were enriched in everything by Him in all utterance and all knowledge,
6
even as the testimony of Christ was confirmed in you,
7
so that you come short in no gift, eagerly waiting for the revelation of our Lord Jesus Christ,
8
who will also confirm you to the end, that you may be blameless in the day of our Lord Jesus Christ.
9
God is faithful, by whom you were called into the fellowship of His Son, Jesus Christ our Lord.

24
Another parable He put forth to them, saying: “The kingdom of heaven is like a man who sowed good seed in his field;
25
but while men slept, his enemy came and sowed tares among the wheat and went his way.
26
But when the grain had sprouted and produced a crop, then the tares also appeared.
27
So the servants of the owner came and said to him, ‘Sir, did you not sow good seed in your field? How then does it have tares?’
28
He said to them, ‘An enemy has done this.’ The servants said to him, ‘Do you want us then to go and gather them up?’
29
But he said, ‘No, lest while you gather up the tares you also uproot the wheat with them.
30
Let both grow together until the harvest, and at the time of harvest I will say to the reapers, “First gather together the tares and bind them in bundles to burn them, but gather the wheat into my barn.”’”